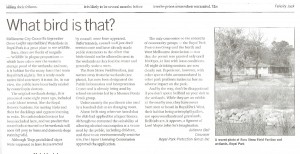 Reds cricketers see a sting in the wetlands tale

Sports Minister Justin Madden extols the virtues of the Royal Park wetlands plan (‘Games bonus’, Letters 25/1). The Reds Cricket Club next door is not so starry-eyed.

The wetlands will flood an existing sports ground – the original state hockey centre – and a potential sports ground across the road. As collateral damage, it will demolish our clubrooms, an action we are challenging before Victorian Civil and Administrative Tribunal.

The whole exercise makes us wonder if the State Government plans to settle 4000 couch potatoes into the Games Village after 2006. If not, how does it intend to meet the increased demand on sporting facilities that the new housing development will create?

If Mr Madden thinks that the rest of Royal Park will be enough, he needs to explain how. The park is already fully booked for turf cricket in summer and its football grounds take a hammering in winter. It has two spare artificial-turf pitches. These will barely accommodate the nine junior teams that we and our sister club, Kensington Juniors, have established in the area already; or the three new teams we plan next season for children graduating to Saturday morning and afternoon competitions over the next few years.

By 2007, when the Games Village turns into a small suburb, there will be no room in Royal Park for the new sporting teams its residents are bound to generate.

The wetlands may have been a good idea back in 1998, when the area was virtually unpopulated, but the Games Village housing development has changed all that. Its 4000 residents will need sporting grounds, not breeding grounds for mosquitoes. In propagandising for the wetlands, Mr Madden is kicking a football that has gone very badly out of shape.
Alec Kahn, president Reds Cricket Club, West Brunswick

Lovely handmade cards of Royal Park available
Please contact us for yours!